As Catholics, we have an obligation to ourselves and to our faith community to remain informed and educated about our ever-changing Church. We do this through a variety of sources:
Here is a list of some resources that you might find helpful:
If you are interested in subscribing, please contact the Parish Offices at 608-742-6998 (Portage) or 608-981-2282 (Briggsville). You can learn more about The Catholic Herald by visiting www.madisoncatholicherald.org.
St. Anthony Messenger is always current, beautifully illustrated, and right on-target with the topics that Catholics want and need to know more about. Each issue provides a blend of contemporary spirituality, news, and practical articles on church life and teaching. A subscription to St. Anthony Messenger is $10.00/year (13 issues). You can get more information about St. Anthony Messenger by visiting their website at https://info.franciscanmedia.org/st-anthony-messenger.

If you are interested in subscribing to St. Anthony Messenger you can mail your payment to:
U.S. Catholic is a very popular magazine that offers refreshing, though-provoking commentary on topics that affect Catholic life as it is lived in the home, hon the job, and in the world. We celebrate the vibrancy and diversity of contemporary Catholicism and aim to inspire readers with a positive vision of Catholic faith today. The print edition subscription is $42.00/year (12 issues), but you can get special offers by visiting https://uscatholic.org/node/31810.

If you are interested in subscribing to U.S. Catholic​ you can mail your payment to:
America Magazine is a magazine that is published by the Jesuits; a lively journal of opinion including crisp editorials and incisive articles on contemporary theology and current events. You can browse through the latest news on politics and society, faith, arts and culture, and so much more! A subscription is $60.00/year (14 issues).

If you are interested in subscribing to America Magazine​ you can mail your payment to:
Catholic Digest connects with readers through personal stories of triumphs and struggles, joys and challenges, and also the lighter side of Catholic living. They are a source of support and encouragement for those who love their faith, those who struggle with their faith, and those who long to learn more about the richness of Catholic tradition.

If you are interested in learning more about Catholic Digest you can address your inquires to:
Since its beginning in 1964, readers have looked to National Catholic Reporter as a credible independent voice in Catholic journalism. NCR is accountable to an accomplished lay board of directors rather than a bishop or head of a religious order. Initially, NCR’s audience was mostly national. NCR has now developed a global online audience, with readers in virtually every country on the planet.

Because of its independent status, NCR goes where other Catholic news sources cannot. In its early days, NCR reported on the reforms of the Second Vatican Council, including the secret findings and the dissenting opinions of Pope John XXIII’s/Pope Paul VI’s commission on birth control. We were the first, and for many years the only, publication to report the clergy sex abuse crisis and episcopal cover-up. We were the first Catholic publication to report extensively on the environment. A subscription is $52.95/year (26 issues).

If you are interested in subscribing to National Catholic Reporter​ you can mail your payment to:

There are countless resources for Catholic to use that can help them grow in their devotion to God and living the Gospel of Jesus. Here are some other resources that you might find useful:
Daily Reflections

- The Word Among Us - www.wau.org - The Word Among Us is intended to assist people in reading, meditating on and understanding scripture [and to] provide sound, practical advice for Catholics on the living out of the Christian life... We can have a relationship of love and friendship with the Son of God.

- Give Us This Day ​- www.giveusthisday.org - Give Us This Day is a monthly publication centered on the Word of God. Drawing inspiration from a multitude of voices, it provides a relevant and trustworthy understanding of Scripture.
Online Resources

- Diocese of Madison - www.madisondiocese.org - We serve to ensure that every individual in the Diocese of Madison is graciously invited every day to meet the person of Jesus Christ, risen from the dead, face to face and be changed by him.
Scriptural Resources

- The Catechism of the Catholic Church (Flip-book) - http://ccc.usccb.org/flipbooks/catechism/index.html

- The Catechism of the Catholic Church (Searchable) - https://www.scborromeo2.org/catechism-of-the-catholic-church

- Compendium of the Catechism of the Catholic Church
​http://www.vatican.va/archive/compendium_ccc/documents/archive_2005_compendium-ccc_en.html 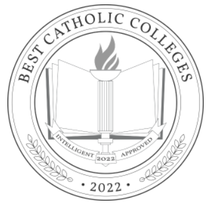 Are you thinking about heading to college? Have you ever thought about getting your degree from a Catholic institution?

Obtaining a college degree not only increases someone's job opportunities but enhances prospects of career advancement as well. An article by the U.S. Department of Education revealed that college graduates generally earn 66 percent more than those with only a high school diploma.

Deciding on the right school is vital in succeeding in higher education. Catholic schools have been long known for having high academic standards and a strong sense of community. For students interested in pursuing an online degree in this educational environment, finding the right Catholic college is the first step. To make this process easier, Intelligent™ came up with a resource to help them know the different institutions available to determine the best one that fits their needs and goals.

Check out this great guide from Intelligent, which outlines the 50 best online Catholic Colleges of 2022:
​https://www.intelligent.com/best-online-colleges/catholic/